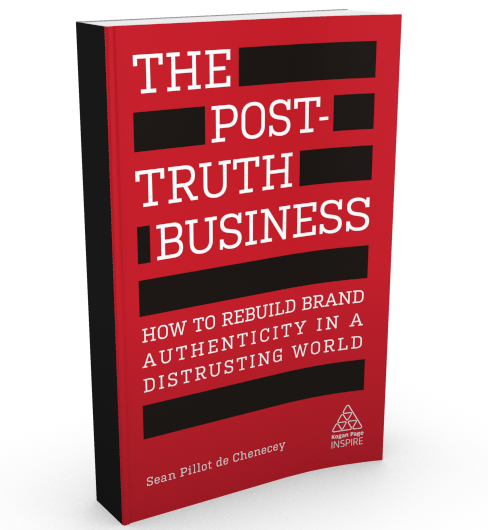 Around the world, brand foundations are being shaken.

It’s apparent that many brand-consumer relationships are on rocky ground, and something fundamental needs to change.

Company strategists are finally realizing that consumers are increasingly judging brands by how they actually behave, as opposed to simply believing the stories they tell. Thus, their brand credibility needs to be based on fact, not fiction.

Businesses want to have strong and long-lasting relationships with their consumers. That brand-consumer relationship is built on trust, but in a post-truth world brands are faced with a serious challenge: so much of modern life is defined by mistrust.

So, for brands today, trust and truth are the most important games in town.

According to The Economist, “consumer trust is the basis of all brand values, and therefore brands have an immense incentive to retain it”. And as that immensely powerful business-figurehead Jack Ma, CEO of Alibaba, stated so succinctly “once you have trust, the rest is easy”.

However, these statements are set against a harsh reality illuminated by a much-cited industry report from the Havas agency, which noted that “much of the trust, respect and loyalty people had for many brands has disintegrated. You see it in the level of cynicism, skepticism and indifference that people have towards them”.

On a macro level, society needs truth and trust as rock-solid foundations. Without both being constantly nurtured and protected, things go very wrong.

This issue has been illustrated by the raging controversy swirling around the giants of Silicon Valley. A disastrous fault-line in their seemingly unstoppable rise as the most powerful corporations in history is that their technology tools, which initially seemed to offer nothing but positivity, have morphed into machines that are destroying truth and trust.

The lack of trust in media organizations massively compounds the problem, with voters and activists at either end of the political spectrum, and all points in between, convincing themselves that the mainstream media is uniquely and outrageously biased against them.

This is all set against a backdrop where people are scrambling to find solid ground in an era when we’re told that the very notion of truth is subjective, and indeed much of public discourse has become increasingly anti-fact and anti-expert.

The Rand Corporation explained this point in its ‘Truth Decay’ report in which it identified four key trends that illustrated the problem –– increasing disagreement about facts and analytical interpretation of facts and data, a blurring of the line between opinion and fact, the increasing relative volume and resulting influence of opinion and personal experience over fact, and declining trust in formerly respected sources of facts.

Indeed, at the 2018 World Economic Forum meeting in Davos, it was noted that due to “hacking, leaking and disputing the facts, it’s never been easier to distort the truth. Fake news and digitization present a major threat to global democracy. Social media in particular has changed the way we consume and share news and information and accelerated the spread of inaccurate and misleading content.”

And the debates over all things post-truth-related cross every political, cultural and social line.

This leaves brand marketers scrambling to make sense of the situation regarding their current business response and future brand strategies. It poses a dilemma for the advertising industry built on the mantra that ‘feelings beat facts’. More so in an era, when consumers are evidently finding truth more motivating than fiction, when it comes to which version of a brand it is that provokes trial and assists in gaining loyalty.

Because, if a brand isn’t seen as credible and trustworthy, then when choice is available it’ll be rejected in favor of one that is, by people who are increasingly viewing themselves as being ‘informed’ as opposed to ‘passive’ consumers.

And that situation is framed within one where virtually every sector is inundated with ‘me-too’ brands delivering seemingly endless consumer options. Meaning it’s never been easier to switch to a brand that’s more seductive.

Brands therefore have to raise their game, particularly when it comes to brand behavior. This is because behavior is a vital element of a brands’ reputation capital; which is itself made up of the ‘honest, competent and reliable’ values that play such a vital role in the foundation of attractive, successful, enduring brands. And a straightforward reason why successful brands have longevity is simply because they’ve built up their credibility by being trustworthy.

Meanwhile, a key lesson I’ve learnt over 20 years of conducting ethnographic research in Europe, Asia, Russia, Africa, the Middle East and North America is that a great deal of the accepted thinking about ‘brand reality’ within companies appears to be incredibly unrealistic. That is, as opposed to actual consumer beliefs about, and their experiences of, brands in the real world. This is often where the credibility gap comes into play, and a brand with weak credibility is a weak brand.

But amid the myriad examples of bad corporations and bad brands, there are numerous superb examples of brands doing things the right way, on a local to international basis, across a multitude of sectors.

The actions that these types of ‘positive brands’ demonstrate are ones in which they focus unrelentingly on building a reputation built on trust, transparency and authenticity. They’re clearly seen by the consumer as being on their side, standing with them and their values.

This is where leadership is absolutely vital, in the setting of a clear and achievable strategy, in ensuring processes, tools and systems are in place to enable the business to meet those positive goals; and to then evidence those actions in a dynamic and motivating way in order to promote future brand-development.

The results will help reconnect brands and consumers, something they increasingly need in our distrusting era. Welcome to the Post-Truth Business…

The author of the October 2018 published book 'The Post-Truth Business', Sean Pillot de Chenecey brings more than two decades of experience, combining marketing consultancy alongside ethnographic research & the interviewing of social/ cultural experts. He has spent over a decade working on trend, insights and innovation projects for some of the world’s leading brands in a wide variety of sectors in the Middle East, North Africa, Europe, Asia and the US. Sean aims to combine high quality research with high level consultancy. He has written for a range of consumer, industry & think-tank publications and is a frequent public speaker. An ex-MBA course lecturer, he still teaches at universities & has given speeches at marketing conferences in Dubai, Turkey, Morocco, Japan, Holland, Germany, Australia, Sweden, Finland, Greece, Spain, Norway, Denmark, Italy, Switzerland, Czech Republic & the US.