The top 10 most popular jobs on LinkedIn received over 940,000 views in the past year, underscoring the UAE’s status as a technology hub in the Middle East.

Four of the most-viewed jobs of 2018, including the two highest ranked, were at technology-related multinational corporations including Amazon (#1), ABB (#2), Huawei Technologies (#4) and Temenos (#8).

The top spot went to Business Development Manager role at the Amazon, which collected more than 124,000 views. Earlier in March, the American ecommerce giant had clinched the top spot in LinkedIn’s 2018 Top Companies to work for in the US, based on reach, engagement, job interest and new hire staying power.

The position of Lead Engineer Railway at ABB came close on the heels of Amazon, with over 121,000 views, followed by Front Office Assistant at Marriott Hotels Dubai Marina Complex with around 115,000 LinkedIn user views.

“It should come as no surprise that technology is the most popular industry for UAE jobseekers, especially as the country continues to drive its tech ambitions. With over 3 million LinkedIn users and 12,000 current job postings in the UAE, we have witnessed more professionals looking to the LinkedIn community for realizing their aspirations,” said Ali Matar, Head of LinkedIn Emerging Markets, Middle East & Africa. 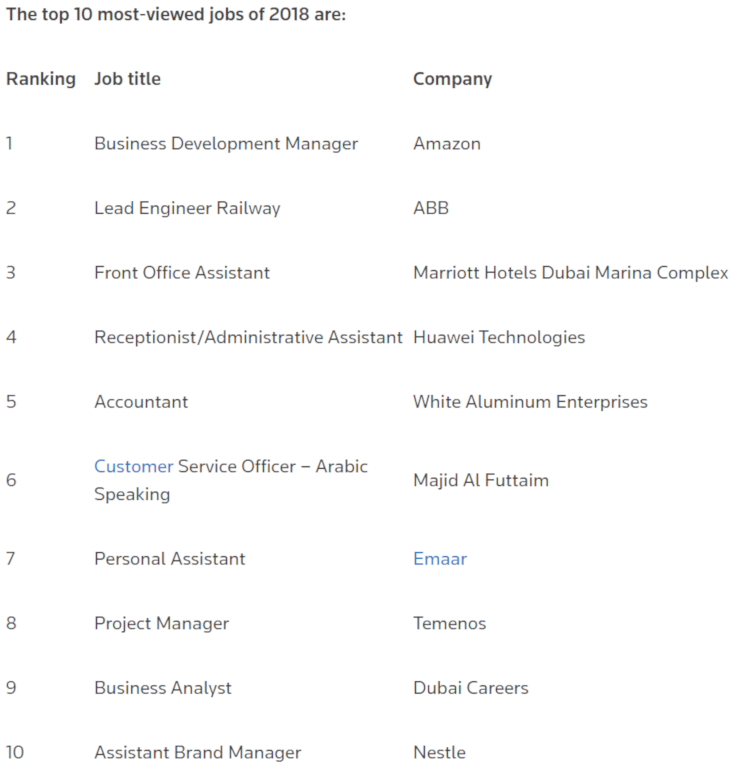 Previous Post: What Marketers Can Do For Stronger Shopper Experiences
Next Post: What Drives Social Media Influencers To Engage With Brands