The results of the survey reflect the reality of print media at present in light of the electronic content revolution witnessed by the world, which prompted the majority of traditional media companies to adopt digitization and invest in this growing sector — a trend which strengthens the theory of the disappearance of print newspapers over the next decade. 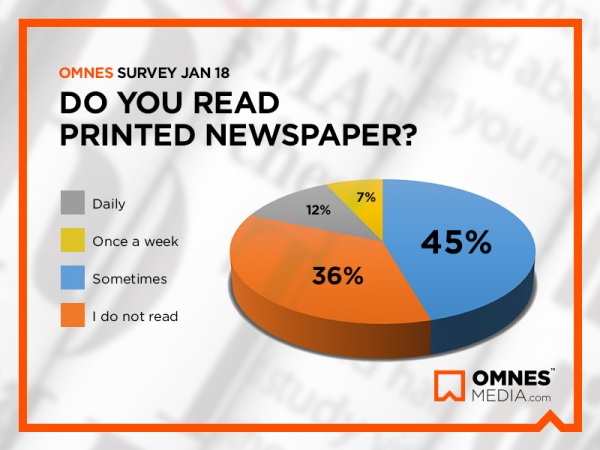 The study showed that 42 percent of the respondents prefer to receive international news through social media, while 24 percent thereof follow e-news sites, 20 percent go for television stations, 8 percent for mobile applications, 4 percent for newspapers and 2 percent opt for radio stations.

These results reinforce the global trend towards social networking and its widespread use among different segments of society, a fact which enhances the position of social networks on the global advertising map as one of the most important marketing tools. The results of the survey also boost the future of smartphone apps, which have posted significant growth globally, emerging as a significant contender in the management and delivery of multiple types of content.

Nasser Al Sarami, CEO of Basma Media, the developer and operator of Omnes Media, points to the extent of the evolution and diversity of mass media over the recent years, during which social media platforms have ensured a wide reach for news media via innumerable sources. He noted that the new media is characterized by sheer freedom.
“It is totally free of any restrictions and censorship, which gives it the power and rapid reach in contrast to traditional media,” he said.

The new media is consistently gaining ground in light of the increased demand for an expedited coverage of news, a trend which indicates a decline in traditional media versus social media sites and e-news.

“There is no doubt that today’s media market is witnessing an unprecedented competition between traditional media and new media, including social networks, websites and other e-news apps. The results of this study clearly indicate the competitive edge unconventional media boasts over traditional sources of media. A large number of internet users provide the necessary ground for new media to secure this superiority over traditional media. However, this type of media needs to be developed and updated in terms of content, marketing and integrity, which are all requirements that are needed to earn non-traditional media credibility and accuracy, especially in the Middle East and North Africa region, which is undergoing rapid developments in line with the fast pace of the industry in the rest of the countries,” Al Sarami added.