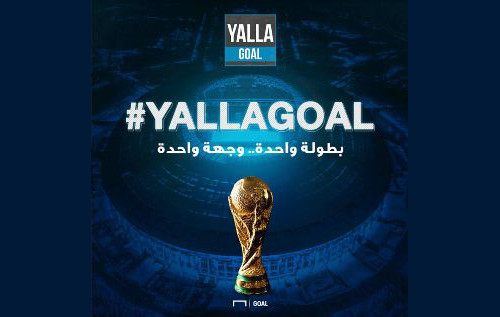 Not even a month has passed and a second live show from Twitter is already on the cards. The social networking platform has partnered with Goal for a live sports show, ‘#YallaGoal’.

Leveraging the audience interest and engagement expected in the 2018 FIFA World Cup, the biweekly evening show will focus on football related news during the tournament. Hosted in Arabic, the show will premiere on June 11, 2018, a few days ahead of the World Cup.

Twitter has already roped in Rani, Unilever’s Axe, Rexona, Clear and Lipton brands, as well as Infiniti as some of the main brands associating with the show.

In the recent past, Twitter has been adding several dimensions to its overall offer in the Middle East & North Africa (MENA) region in a bid to continue augmenting its content play, and correspondingly grow its advertising pie.

The sponsorships for #YallaGoal will allow Twitter tailored audiences –– in this case Arab speaking football fans –– to access and view the live episodes, which will appear as Promoted Tweets, while they’re scrolling through their timelines.

“Numbers clearly indicate the high spike in this audience segment, every time an event of significance or any moment takes place during the matches and the overall tournament. These moments provide opportunities for brands to jump in. When it comes to football, this is exactly the event and the platform, for brands to maximize their chances of taking a message across,” explained Benjamin Ampen, Managing Director, Twitter MENA.

Just ahead of Ramadan, Twitter partnered with Step Group to launch #HawanahZein, the first live show in the region, with Ramadan themed content. These live shows not only take forward Twitter’s strategy over the years of enabling real time conversations for brands and providing opportunities to be part of key moments but also the fact that live is always a critical component for sports led content.

In this case, Twitter also ensures a strong local flavor for a global event.

Content creators, Hany Hathout (@HHathout) and Abdulaziz Al Abdan (@azizooghali) will host the show. Produced by Goal, it will cover a variety of World Cup topics including insights, football-related entertainment and celebrity news. The editorial insights will include debates, team and player reviews as well as opta analyses, followed by entertainment segments that will feature live Twitter polls and Q&A’s, injecting humor and competitions for viewers. It will also feature interviews with guests from across the region.

“This is a show by a local producer, with local hosts, specifically made for local audiences. This too is testament of the fact that Twitter is really creating options with the region in mind,” Mr Ampen added.

From a MENA advertiser perspective, this is yet one more way to engage with digital. “We love digital in any form because consumers live there. We have metrics and KPIs for digital investment, and we can see it in views and impressions but more importantly we see the real time engagement, what consumers are telling you us about the brand’s messages. This is very valuable and something we cannot get from traditional media,” said Kursat Kaymaz, Marketing Manager, Rani.

The show also serves as an option for marketers looking for newer ideas to connect with.

“A show such as this is new to the region and aligns with innovation we would like to associate with. From my experience, this feels like the right idea, which is in the moment and makes sense,” added Karsten Jankowski, General Manager, Marketing & PR, Infiniti Middle East.

The live stream will be free and accessible globally to logged-in and logged-out users on Twitter and connected devices. The show will air on different days and times of the week, after key fixtures and match days played by the Arab teams.

According to recent research conducted by Hall & Partners in Saudi Arabia, Egypt and UAE with Twitter users who intend to follow the 2018 World Cup, 97 percent of respondents are excited about this year’s games. The majority (72%) said that Twitter is their go-to place for World Cup content, most of whom (54%) plan to access Twitter to watch video highlights of the games.

Across MENA, Goal’s engaged audience is in excess of 20 million. Globally, Goal has 67 million monthly users and more than 50 million social followers.